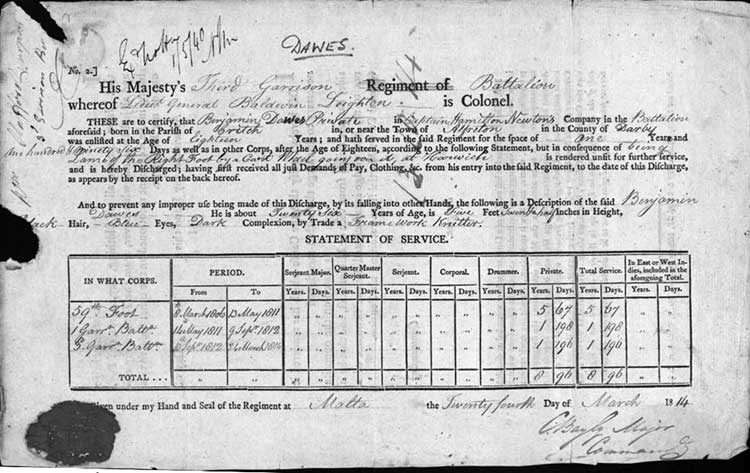 His record showed him to have been aged 18 at enlistment; 5 ft 7½; blue eyes; black hair; dark complexion; a FWK.

He was discharged on 24 March 1814 after just over 8 years service the result of becoming lame after his right foot was run over by a cart wheel going over it at Harwich. 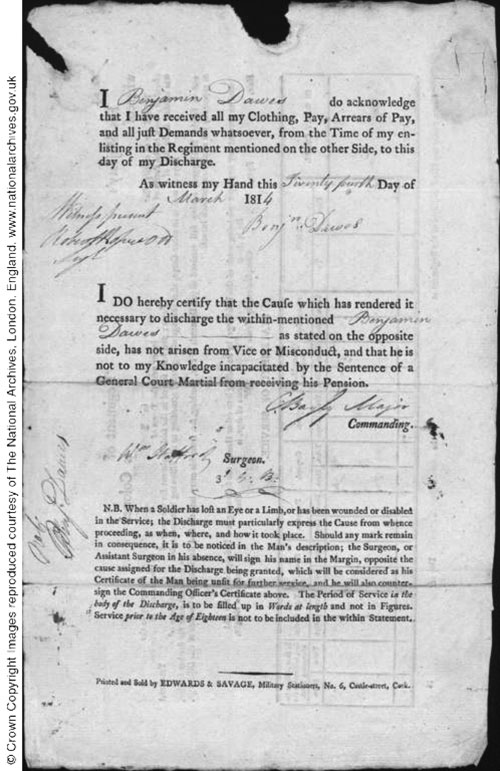 Settlement Certificate 1813
The Examination of Benjamin Dawes of Crich in the County of Derbyshire taken on oath before Philip Geo Gell Esq ? of his Majesty’s Justice of the Peace in and for the said County the 5th day of January 1813 touching his last place of legal settlement .
Who saith that he is upwards of 25 years of age that he was born at Crich in the parish if Crich in the said County of parents legally settled there that when he was about 13 year of age that he was bound apprentice to Richard Berresford of Alfreton in the said County Framework Knitter for 6 years that when he had served him about 11 months his master failed and was made Bankrupt. The Assigner under the Bankruptcy destroyed the indentures. He was at liberty, he then returned to Crich and worked with Mr Curzon about 2 years he then left and went to Hathern in Leicestershire and worked as journeyman there about 9 months, he then returned to Crich and worked there as journeyman – that about 7 years since he enlisted into the 59th Reg of Foot and that he is now in the 3rd Garrison Battalion now at Cove near Cork – that about a week ago he intermarried with Lydia Curzon and that he has done no other act to gain himself settlement.
Benjamin Dawes , sworn before Philip Gell, Charles Hunt
[with thanks to Prunella Bradshaw]

Their son, also called Benjamin, was baptised on 13 March 1814 at Crich; his father's occupation was "soldier". He died an infant and was buried 5 August 1814 at Crich. 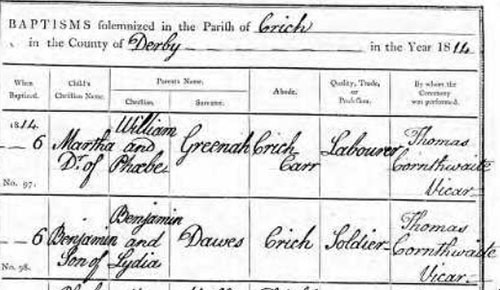 Benjamin Snr was discharged from the Army through injury 11 days after the baptism. 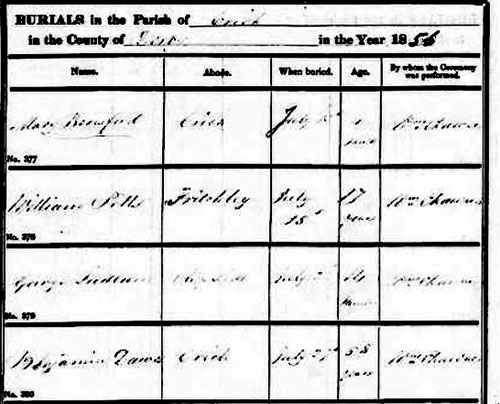 With thanks to Punella Bradshaw for information received