Photos from the Geoff Dawes' archive 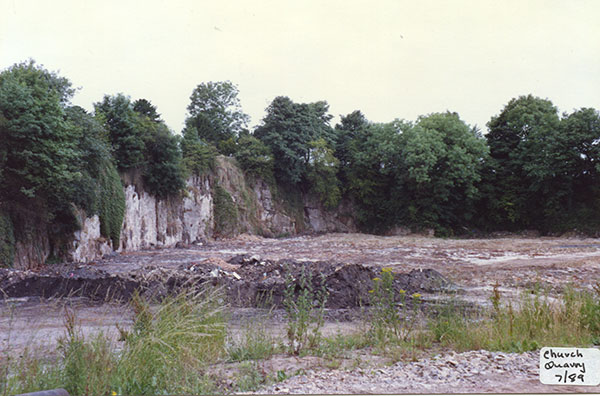 Church Quarry at Crich in 1989 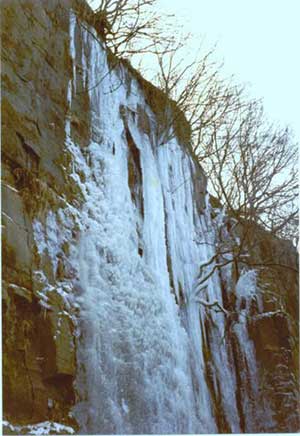 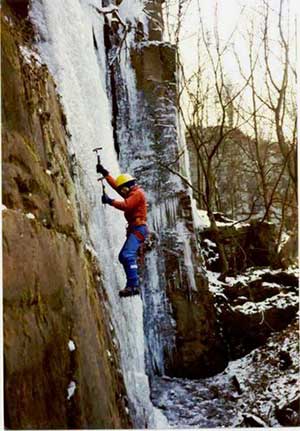 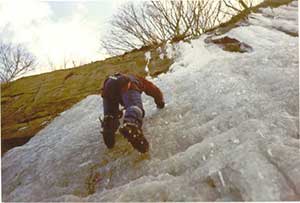 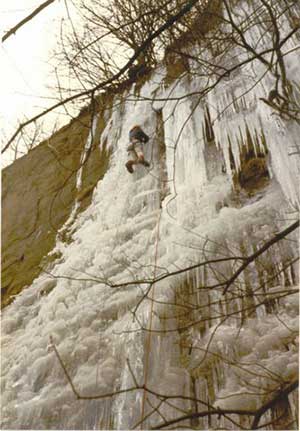 Climbing on an ice wall in Dukes Quarry

Tony Lester, of Fritchley, looks back on the history of the quarrying industry in the Crich area during his childhood in the 1940s.
MY wife and I were coming back from a visit to the optician at Crich when we met an old friend from Fritchley, Barry Barder, who moved away some years ago. He said he was showing his neighbour around some of the mineral railway remains in the area and this prompted me to do some of my own research, looking back through some of my photographs. One track ran from the Warner Quarry to a canal wharf at Ambergate. The second and main one ran from Cliff Quarry at Town End, Crich (now the National Tramway Museum) to the lime kilns at Ambergate. It went under the Holloway road and a small footbridge in the fields, then under road bridges at Wheatsheaf and Jeffrey's lanes, over a small stone bridge at Coasthill, then over a tall arched bridge (now removed) over Bulling Lane. It then went through a cutting and a tunnel around 70 yards long cut out of solid rock under the Whatstandwell road. We used to call it the "Dark Tunnel" for obvious reasons. The track continued through the fields and over the road at Chadwick Nick, where an engine shed still stands, and onwards to the top of The Steep or incline where there was a sharp drop, around a one-in-four gradient, then under a small footpath bridge near the bottom and on to the kilns. There was a large winding drum at the top, with a long cable that ran to the bottom and attached to empty wagon. Full ones were attached at the top and, as they descended, they pulled the empty ones up.

Lime produced from the kilns was used mainly in the production of steel and by the chemical industry. Limestone was used for road-building, railway ballast and cement. I used to go down with my dad for bags of lime for the farmers and the local horticultural society. We had to cover our nose and mouth as it was very dusty and hurt our throats. A gas plant now stands on the kilns site.

There were four quarries in the Crich area –
Cliff Quarry at Town End,
Warner and Hilts on the east side of the village, and one near the church called Church Quarry. The "old" Warner Quarry was worked from 1793 to 1933 and was the first to have a track laid. It ran from the quarry, came out near the old hat factory in Dimple Lane and continued over the fields, under a footpath bridge, through a cutting and tunnel under the road near the old Fritchley Post Office and down to a kiln near Amber Wharf on the Cromford Canal.
Hilts Quarry was nearer the village. It opened in 1844 and closed in 1932. Its track ran from the quarry under the road at the hat factory (where an engine shed still stands) and joined the existing line to the canal.
Church Quarry, being only a few yards from the churchyard, had a track which ran through a tunnel under Cromford Road, across some fields and joined the Cliff line at Jeffrey's Lane.
As children, we played in three of the quarries. The "old" Warner and Church quarries are now filled in and a company started tipping waste in Hilts Quarry but this ceased after protests from villagers. I spent a lot of time in the "old" quarry over the years. I used to go down at around 7am on a Saturday and pick blackberries for people (6d a time) and had regular customers. The brambles grew on a shelf at the top of the banks and nearby was a well-stocked newt pond with bullrushes at one end. In later years, until and whilst being filled in, I took a lot of photos, especially when it snowed. When the snow melted the quarry bottom was flooded.

One night in the war, the Home Guard units from all over the area met in Crich market place then went down into the "old" quarry. They fired Bren guns and the like from one end at oil drums at the other end and then fired shells at the rock face. The tins and rusty shell remains were still there when the quarry was filled in years later.

People of all ages went into Hilts Quarry. We children played there, made tree houses and bows and arrows and catapults. People fetched pea and bean sticks and firewood from the quarry. Some men took dogs and nets to catch rabbits for eating. Mrs Brown, our class three and four teacher, used to take us down there on nature walks. The place teemed with wildlife, with pigeons nesting on the rocky ledges. It was sandy in the banks at the top and this was riddled with sandmartin holes. Mrs Brown also took us up to Cliff Quarry to watch the men working, blasting the stone down, breaking it up and filling the wooden wagons. Miss Hammond (our Cub Scout Akela) used to take us Cubs down to the Hilts. We played games, did woodcraft and built shelters from the plentiful supply of materials lying around.

The quarries provided work for a lot of men over the years, as did other local firms like Johnson's wire works, Lea Mills, Stevenson's dye works, Belper mills and Oakerthorpe colliery. Now, only Lea Mills are still operating.