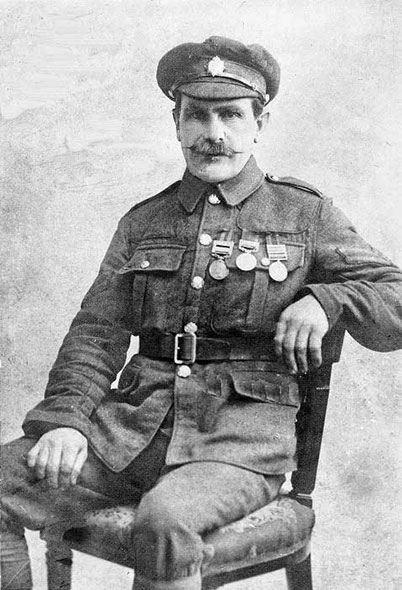 William when serving in WW1

During the 1880s, William worked as a factory hand in the Crich area. As a young man he was part of a volunteer battalion of the Sherwood Foresters. At eighteen years of age he left Crich to become a regular soldier, enlisting as a Private in the King’s Royal Rifle Corps at Winchester. He served with his regiment in India, Burma and South Africa.

He married Sarah Ann EASTWOOD at Skipton in the West Riding of Yorkshire, in 1898. They had eight children, six boys and two girls. In November 1899, only a few months after his marriage, William was recalled to active service as a result of a Special Army Order and served with the King’s Royal Rifle Corps during the Second Boer War in South Africa.

By the time he returned from South Africa the family were living at Westmorland Street in Skipton and he soon found employment as a railway porter. The family remained in Skipton for a number of years, where William is known to have worked as a lamplighter for the Urban District Council, and later as a chauffeur for a local jeweller. The family later moved close to Bradford at the village of Saltaire, near the town of Shipley, where he worked at the mills of Sir Titus Salt.

A month after the death of his wife, William died at Shipley on 18th February 1952, aged eighty-two years. He was interred in Nab Wood Cemetery at Saltaire.
[With thanks to Louis Sheldon and Simon Johnson]

Belper News 12 April 1900
THE WAR
“The Devils were begging for mercy!’
Private W SHELDON (of Crich) 1st Batt. King’s Royal Rifles, who was with General BULLER’s force when Ladysmith was relieved, writes as under: – 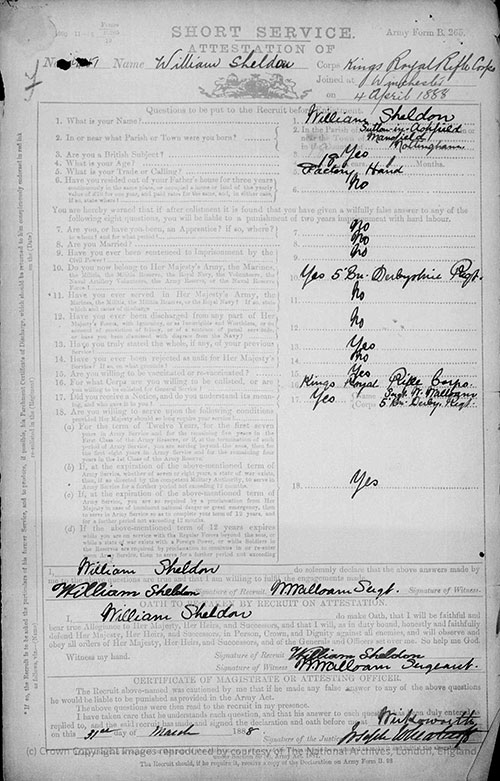 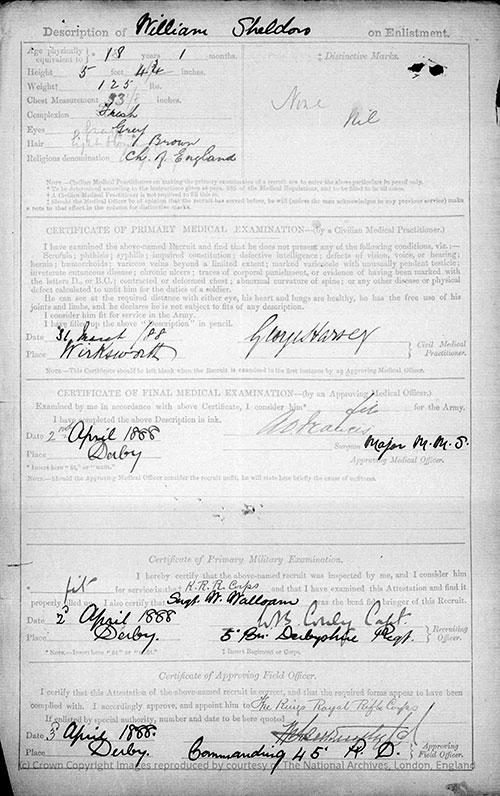 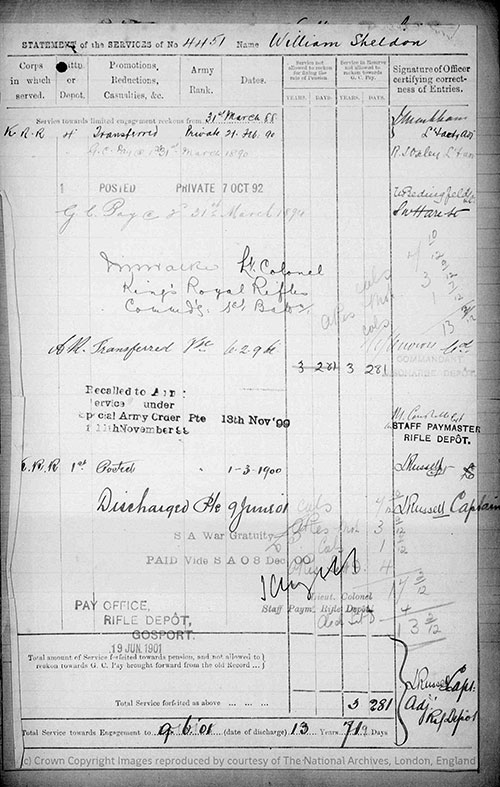 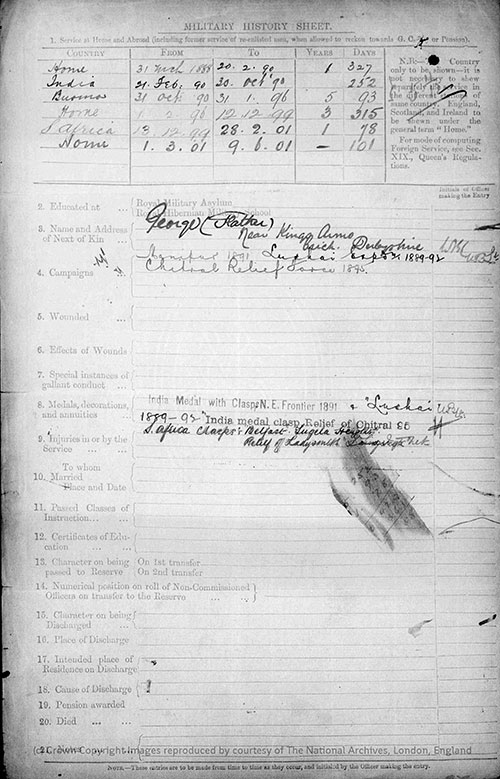 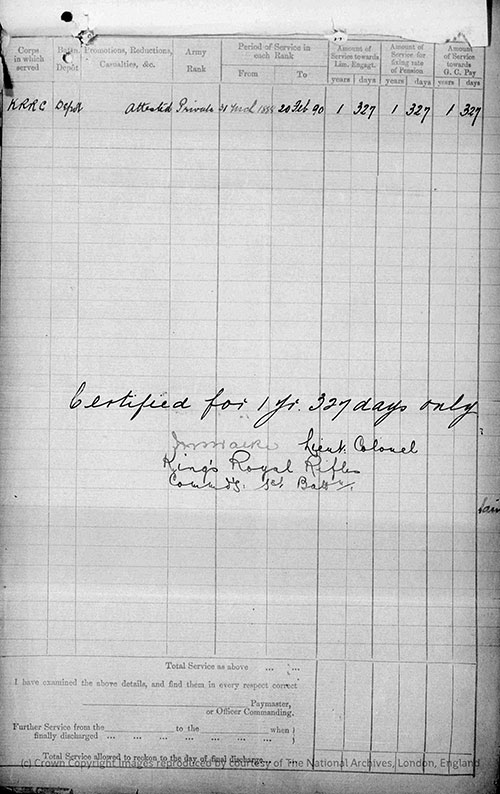 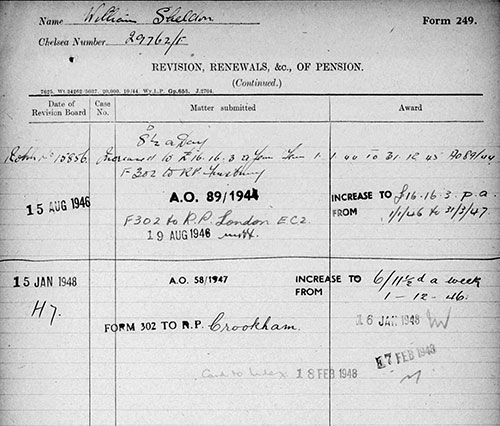 Note: The Chitral Expedition was a military expedition in 1895 sent by the British authorities to relieve the fort at Chitral, which was under siege after a local coup following the death of the old ruler. An intervening British force of about 400 men was besieged in the fort until it was relieved by two expeditions, a small one from Gilgit and a larger one from Peshawar.
Belfast is a small town in Mpumalanga Province, South Africa
Tugela Heights, was the site of a series of military actions lasting from 14 February through to 27 February 1900 in which General Sir Redvers Buller's British army forced Louis Botha's Boer army to lift the Siege of Ladysmith during the Second Boer War. 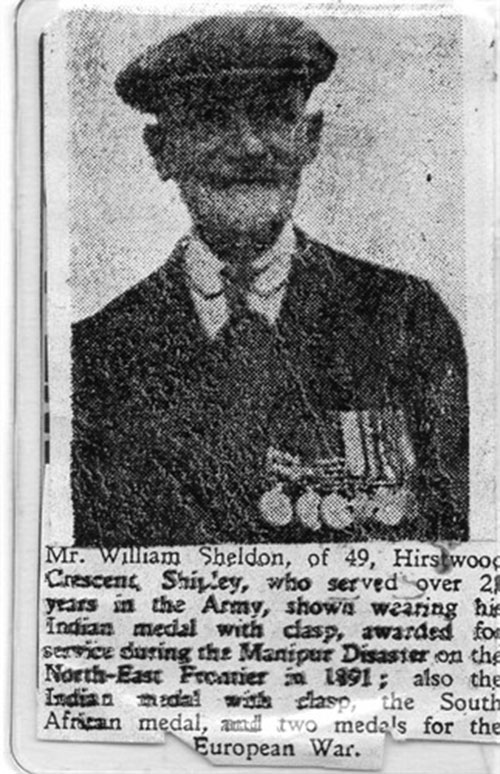 William Sheldon also served during WW1 and is on the Crich Roll of Honour.
See his record for that period: William SHELDON in WW1