The following are snippets form the Baptist Minutes Book dated 1929 – 1958. Most of the minutes in the book are concerned with the administration of the Chapel but the following are a few which may be of historical interest.

22 Mar 1932
Application from the Derbyshire and Nottinghamshire Electric Power Company to erect a power cable over the Baptist Church property to the miners’ welfare. This was not agreed upon.

Jan 1935
Miss Flaura (sic) Macdonald requested permission to plant two Jubilee trees (double cherry trees) in front of the chapel. One paid for by the Girl Guides the other by Dr Macdonald. This was granted

27 Feb 1937
Tribute to the memory of W T Colwlishaw who had been treasurer for 40 years.

4 Oct 1937
To obtain estimates for putting in working water closets for the 3 cottages occupied by Mrs Flint, Mrs Haslam and Mrs Neville.

7 April 1940
Agreed that Ivan Baldwin and Miss Gaunt have the use of the Chapel for their wedding on 11 May and the use of the schoolroom for their reception.
Mr Noel Harrison (caretaker) called up for military service.

9 June 1940
Education Authorities want to use the schoolroom for 40 evacuees education. At a charge of 15/- per week
But on 16 June 1940 they were transferred to Crich CofE School (Mr Haywood, headmaster)

2 April 1944
A community service to be organised for “Salute the Soldier” on Sunday 9 July at 8.15pm

24 March1945
Mr Burrows, Liberal Candidate given permission to use the Sunday School room as his committee room.

22 April 1945
Permission given to use the schoolroom for the purpose of distributing ration cards.

22 June 1947
Owing to deterioration of the gas fittings estimates requested for electrical installation.

13 July 1947
Estimate received for fitting electricity of £70.10.6. An alternative quote from Jewitts of Ripley requested.

18 March 1956
Mr Clark Chemist applied for tenancy after Mr Lake had left the property. He wanted it for storage. This was agreed although he was advised strict conditions would be applied – it was unacceptable to allow the property to look like a warehouse.

June 25 1958
Considered the purchase of a reconditioned electric clock from John Smith & sons at a cost of £140, A village collection towards the cost was suggested

Sept 1958
Mr Alfred Bowmer offered free assistance in the installation of the new electric Clock, in preference to the reconditioned one..
Up to Nov3 1958 £186.11.0 had been raised through public subscription 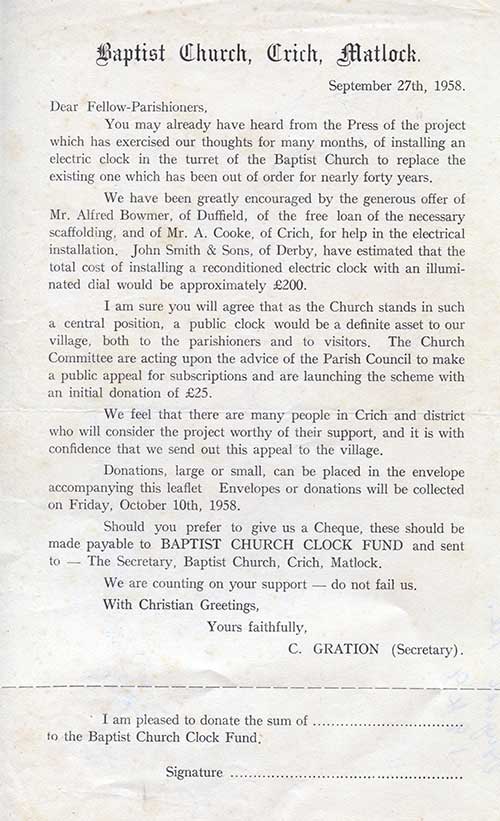 A copy of the public appeal from the minute book