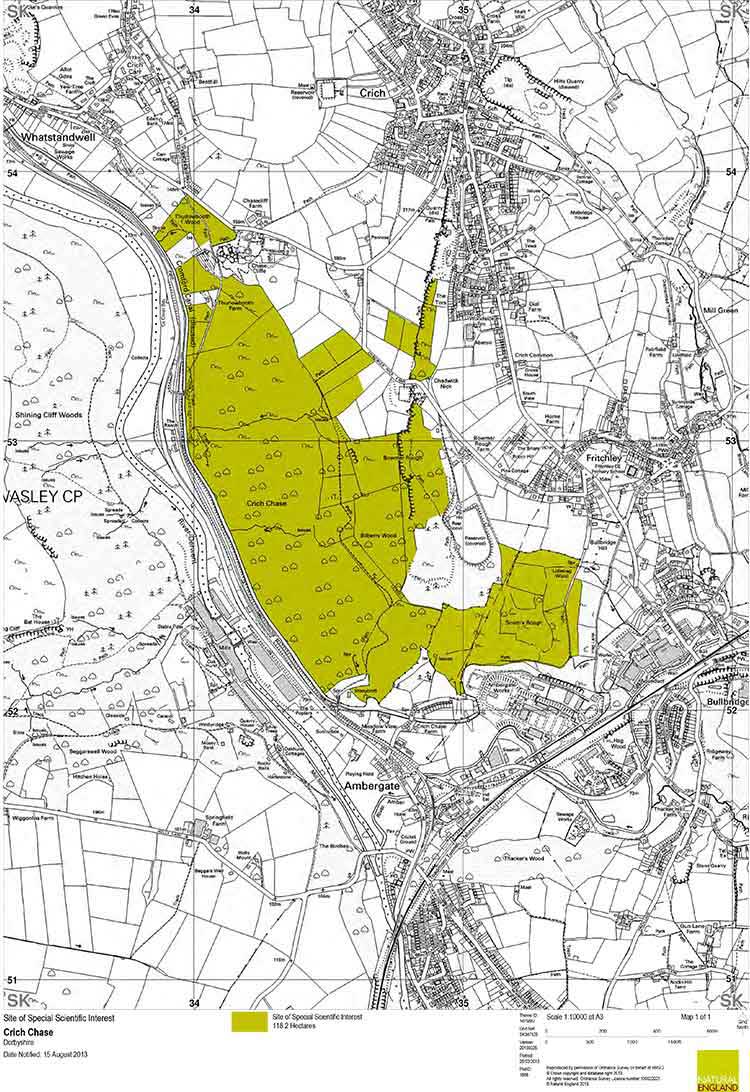 The site occupies a steep south-west facing ridge on the shales and sandstones of Millstone Grit overlooking the River Derwent near Ambergate.The site comprises a mosaic of habitats including long-established semi-natural woodland (much of which is recorded as ancient semi-natural woodland), and neutral and acid grasslands.

The majority of the site supports an extensive area of ancient semi-natural woodland forming one of the largest and most structurally diverse semi-natural woodlands remaining in the Derwent valley of Derbyshire and of interest being on the upland fringes of the Peak District. There is evidence of a long history of woodland cover on the site, with the Chase noted as forming a north-eastern outlier of the medieval hunting forest of Duffield Frith.

The woodland is structurally diverse and variable in tree cover, and comprises a mix of both dry and wet woodland types. It is generally characterised by pedunculate oak Quercus robur, silver birch Betula pendula and locally sycamore Acer pseudoplatanus on the upper slopes, with alder Alnus glutinosa, ash Fraxinus excelsior, downy birch Betula pubescens, and willow Salix spp. forming small distinct stands over flushed ground around streams and springs. Scattered through the woodland is a generation of aged, over-mature or ‘veteran’ trees that display signs of past coppicing or pollarding and which largely comprise pedunculate oak, birch, alder and sweet chestnut Castanea sativa.

The uppermost slopes of the Chase are characterised by more open woodland stands on thinner soils, dominated by silver birch with scattered oak and occasionally sycamore and young rowan Sorbus aucuparia. Woodland cover across this area is much patchier and here the field layer is dominated by bracken, wavy hair-grass Deschampsia flexuosa and broad buckler-fern Dryopteris dilatata. There is typically little under-storey here, although occasionally holly Ilex aquifolium, hawthorn Crataegus monogyna or younger trees occur. The topography of the steep upper slopes is rugged and in places punctured by rocky gritstone outcrops and large boulders where there are some dense stands of great wood-rush Luzula sylvatica with more occasionally hairy wood-rush L.pilosa. Heath bedstraw Galium saxatile, climbing corydalis Ceratocapnos claviculata and wood sage Teucrium scorodonia are particularly associated with these stands.

The unimproved grassland vegetation is further distinguished by a rich assemblage of grassland fungi. Crich Chase is one of the few sites in Derbyshire to contain these types of unimproved grassland together with a rich fungal assemblage, and this is largely attributable to the lack of agricultural improvement and low nutrient status of the land, together with regular grazing by livestockand rabbits. The key groups of this fungal assemblage are the waxcaps (Hygrocybe), fairy clubs (Clavariaceae) and pinkgills (Entoloma). The waxcap diversity is exceptional, with 25 species recorded.

Species include the plum-red Hygrocybe punicea which is strongly indicative of unimproved grassland and is abundant in places, the orange-yellow H.aurantiosplendens, the brown H.colemanniana and the bright red H.calciphila, both of which are indicative of more calcareous soils. In addition, H.coccinea, a robust and sticky scarlet cap common in unfertilised pastures, the lime-yellow H.citrinovirens, the green parrot waxcap H.psittacina, and the pink ballerina waxcap H.calyptriformis also occur as part of this assemblage. There are 19 pinkgill species recorded including the scarce Entoloma exile, E.griseocyaneum, E.asprellum, E.catalaunicum and a notable population of the nationally rare big blue pinkgill E.bloxamii. The grassland fungi assemblage also contains 11 species of fairy club including the straw-yellow fairy club Clavaria straminea and the meadow coral Clavulinopsis corniculata.

In addition to the reasons for notification, the woodland supports an assemblage of moths known to include 140 species, of which 16 are considered locally rare or uncommon. One of these, the argent and sable Rheumaptera hastate, is listed as nationally scarce and is closely associated with stands of young birch in open sunlit conditions. The upper slopes of the woodland also host colonies of the northern wood ant Formica lugubris,a species which is closely associated with open old forest habitat and has a very local distribution in Britain and occurs at Crich Chase  towards the southern edge of its range in Great Britain. The flower-rich grasslands support butterflies including dingy skipper Erynnis tages, which has a localised distribution in Derbyshire