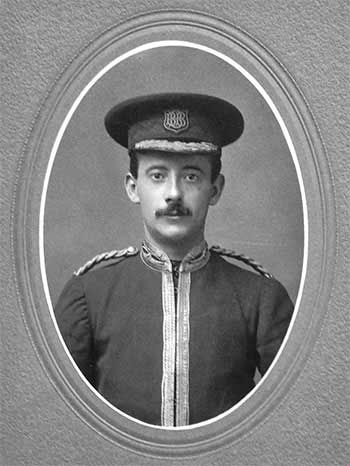 Biography
Samuel was born at Crich in 1881, the son of Henry and Ellen HOLLINGSWORTH. He worked at Lea Mills all his life, apart from his army service during the first world war. He married Martha Ann ALLEN in July 1904. He was a gifted tenor horn player, playing for both Lea Mills Band and Crich Silver Band.

Before the war he used to play for the famous “Besses o’ th Barn Band", from Lancashire, when they were at their best. He toured with them during their world-wide performances in America, Canada, Australia and New Zealand winning many solo contests.

Derbyshire Times 4 August 1906
Many will be pleased to hear that Mr S. HOLLINGSWORTH, of Crich, has been honoured by being selected as solo tenor horn player in the famous Besses o’ th’ Barn Band, who have just started on a tour round the world. Mr HOLLINGSWORTH has been a player of the Lea Mills Prize Band for some time past. 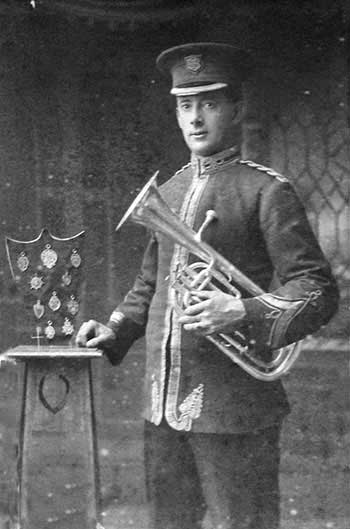 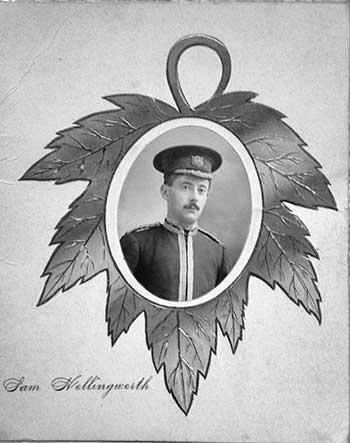 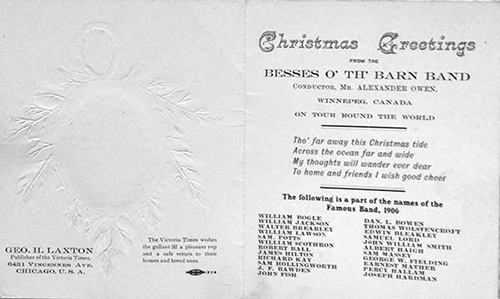 Christmas Card from Chicago dated 1906
Belper News 29 November 1907
The Besses o’ th’ Barn Band, who sailed from Australia last week, after their tour there, includes Mr Sam HOLLINGSWORTH, of Crich, who is a horn player. His many friends are arranging to welcome him home in a suitable manner. A committee has been formed, and a meeting held at the Kings Arms Hotel. Mr John KNEEBONE has been appointed secretary, and Mr W. WILLGOOSE treasurer, to try and raise subscriptions to get up a torchlight procession to greet Mr HOLLINGSWORTH on his return.

Belper News 3 January 1908
The Besses o’ th’ Barn Band, who have been travelling in America, Australia, and New Zealand, have returned. One of the instrumentalists was Mr Sam HOLLINGSWORTH, a native of Crich, and a member of the Lea Mills Prize Band. Mrs HOLLINGSWORTH, with her friends, met her husband at Derby, and on their arrival at Ambergate on Saturday, Sam met with an enthusiastic reception from his late fellow bandsmen who had amalgamated with the Crich Brass Band, and with flaring torches escorted him to the Crich Market Place. On his arrival “Home, Sweet Home,” was rendered by the bandsman, and at the termination of the procession “auld lang syne” was played. Mr William FOSTER welcomed Mr HOLLINGSWORTH home, and in reply the latter said that the Besses had had a most delightful trip , in every sense of the word. The hospitality shown to them by our kindred across the seas would never be raised from his memory. He found some difficulty in restraining his emotion, and the rendering of “Home, Sweet Home,” was almost more than he could bear. Three cheers were then raised by the crowd of 200 persons present. The procession was reformed in the Market Place, and the Band, striking up a lively air, played him to his home, where friends were awaiting his return after an absence of 17 months.

His band playing days were interrupted by the onset of WW1 when, along with many of work colleagues, he enlisted in the Army; serving initially with the Sherwood Foresters before being posted to the Royal Garrison Artillery. 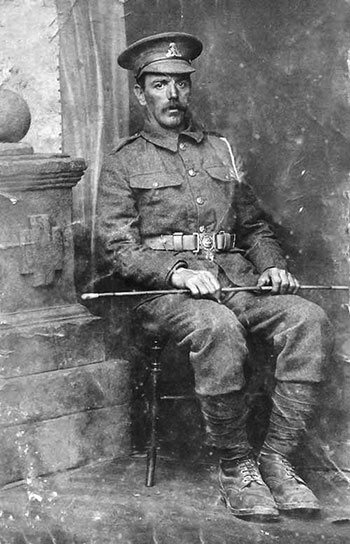 After the war Sam returned to playing with Crich Silver Band where he was its bandmaster.

Derbyshire Courier, 29 March 1919
Crich, Lea and Holloway
The total number of men who have entered the Army and Navy from Crich since the beginning of the war in 1914 appeared to be about 300, of whom 60 had been killed and about 40 others seriously and permanently disabled.
The return to civil life of Gunner Samuel Hollingsworth has given great satisfaction to Crich parishioners generally and to music lovers in particular. Before joining up, Gunner Hollingsworth was beginning to see the fruits of his labour as bandmaster and conductor of the Crich Silver Band. During his absence Mr WT Curzon has deputised with much success, and on his return to the bandroom at their recent practice Mr Hollingsworth found that, despite war’s levy on the men, the band was still forging ahead. With over two dozen players and an excellent set of instruments, backed up by the skilled tuition of their returned leader, a rosy future is promised.

Derbyshire Courier, 30 August 1919
Mr S Hollingsworth and members of the Crich silver band were successful in a contest at Barrow Hill, on Saturday. Although it was their first attempt in the contest field since the band has been reconstituted, they gained the second prize in the quickstep piece, and fourth in the selection contest, against a number of high-class bands. A good future is assured for the band now that several of their former players have returned from military service.

Derbyshire Courier, 30 August 1919
An impressive memorial service for Lea and Holloway men who fell in the war was held at Christ Church, Holloway, on Sunday and was conducted by the Rev Canon WG Mosse, vicar of St Annes, Moseley, Birmingham. The congregation, which was representative of all classes, included the local discharged and demobilised soldiers and sailors, who marched in charge of ex-Sgt Foster from Lea Shaw to the church, headed by the Crich Silver Band. A portion of the church was also reserved for the relatives of the fallen. The service opened with the National Anthem, played by the band, under the batton of Mr S Hollingsworth. Canon Mosse preached from the text, “What mean ye by the service?” and emphasised the fact that if we must honour the memory of the fallen we must stand by the principles for which they fought and died. The hymns sung were: “For all the Saints,” “There’s peace and rest in Paradise,” and “Fight the good fight.” Miss B Price was the organist. After the sermon the band played the Dead March in “Saul,” and the “Last Post” was sounded by Mr S Hollingworth. Following the service the ex-soldiers reformed at the church gates and marched back to the Green, Holloway. The necessary arrangements had been made by the committee of the local branch of the Federation of Discharged and Demobilised Soldiers and Sailors.

The quaintly named Besses o' th' Barn is an old industrial town situated between Manchester and Bury, in Lancashire. Competing theories for the origin of the name abound. Perhaps the most colourful involves Dick Turpin’s famous mount – Black Bess! The most likely, though, is that it stems from the name of the (in)famous landlady of a local hostelry. Besses o' th' Barn’s main claim to fame, however, is that it was the birthplace of – and has given its name to – what is certainly one of the oldest and arguably most famous brass bands in the world.

The origins of this celebrated outfit of amateur musicians can certainly be traced back to 1818, when the reed band based at Cleggs Cotton Mill was first mentioned. It is this date that "Besses," as the Band is affectionately known, takes as its inception. In the 1880's the Band moved into its present band room, situated behind the Red King public house on Moss Lane, Whitefield.

By the late 1800’s, Besses were already firmly established as one of the country's leading musical ensembles – amateur or professional. At that time, much of the repertoire of brass bands still consisted of arrangements of popular classical music, designed to provide the working classes with access to the works of world famous composers. People from the cotton and coal towns of Lancashire could afford to listen to their local brass band playing classical arrangements in local venues, whereas there was virtually no prospect of them being able to pay to travel and listen to professional orchestras in the major city centre venues. Many such arrangements, for example Rossini's Works and many of the early Henry Round selections, were made especially for Besses. Even by the high standards of today’s top bands, many of these pieces demand a remarkably high degree of both technical skills and endurance.

The early years of the 20th century saw Besses at the peak of their success, starting with the Band's surprisingly one-and-only National Championship win, at the Crystal Palace in 1903. They were now so successful in the competitive arena that they decided, for a time, to leave the contest field and proceeded to embark instead on a series of truly pioneering events and adventures.

Promoted by John Henry Iles as 1903 National Champions, Besses embarked on an extensive tour of the UK. Little could they imagine then where this first tour would eventually lead them. Hints of great things to come started with an invitation by the Prime Minister, Henry Balfour, to play By Royal Appointment for King Edward VII at Windsor Castle. This performance led directly to a tour of France with concerts in Paris to commemorate the Entente Cordiale pact between France and Great Britain. On the Band room wall sepia photographs can be seen of Besses performing to huge crowds in the Tuileries Gardens in the very heart of Paris. Henry Iles and Alexander Owen were both presented with Officier de L'instruction Publique medals to mark the occasion and Besses had the "Royal" prefix bestowed upon them as their fame spread throughout the world. Invitations to play were received from all around the globe.

In response to ceaseless requests and displaying amazing courage, the Band decided to tour the World. Between the years 1906 and 1911 they did just this not once, but twice! Both trips lasted an incredible eighteen months. Stories of players leaving home, on the pretence of heading for normal band practice, and arriving back home one-and-a-half years later may contain more than a grain of truth. Detailed itineraries show that the Band played hundreds of concerts covering venues in North America, Canada, Hawaii, Fiji, South Africa, New Zealand and Australia. They were regarded as pop stars of the day and welcomed by enthusiastic crowds of thousands wherever they went.

An arrival parade in Melbourne during one of the tours saw the Band preceded by no fewer than twenty-two of Australia's finest brass bands. Their stay culminated in four days of concerts in the city that attracted a total crowd of over 100,000. It took the arrival of The Beatles more than sixty years later before the city once again saw such vast crowds for visiting musicians.

The wealth of information on these early tours comes largely from diaries written by various members of the Band. Luckily some of these very personal records are still in existence and carefully tended in the Band's archives or by descendants. The details in the diaries are truly fascinating and even include train and boat timetables from all over the world. One such document dutifully records that during the Band's second tour of New Zealand Alexander Owen composed a march, which he named after a famous porpoise, known to seafarers as Polorus Jack. The diary faithfully chronicles the event, even down to the name of the ship (SS Pateena) on which the Band were sailing when the idea was first conceived. The score even includes a triangle part, said to be an imitation of the dinner gong, which rang to summon the players to their meal just as Alexander finished writing the piece. Polorus Jack has now become one of the Band's favourite signature tunes and is often included in present-day concert programmes.

Other notable souvenirs from those early tours include a genuine wild boar trophy presented to the Band in New Zealand in 1910. None of the music in the Band’s immense library, however, is thought to be inspired by that awesome creature! It is still proudly displayed on the Band room wall, opposite the large (some would say intimidating) photograph of Alexander Owen, whose eyes seem to follow you around the Band room – especially if your playing isn’t up to standard! 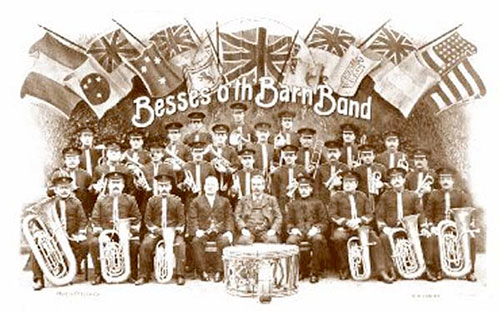 Promotional photograph for one of the World Tours