William WILKINSON was a chair-maker from Crich born about 1828 who spent his army service in India.

William was involved in several of the major conflicts of the British East India Company's administration. He served in the first and second siege against Multan of 1848/49. He was involved in the Battle of Chinhut in 30 June 1857 and was involved in the defence of the Residency of Lucknow (which was from 30 June until 2 November 1857). During the September of 1857 he was severely wounded in the right leg and medically discharged in 1860. 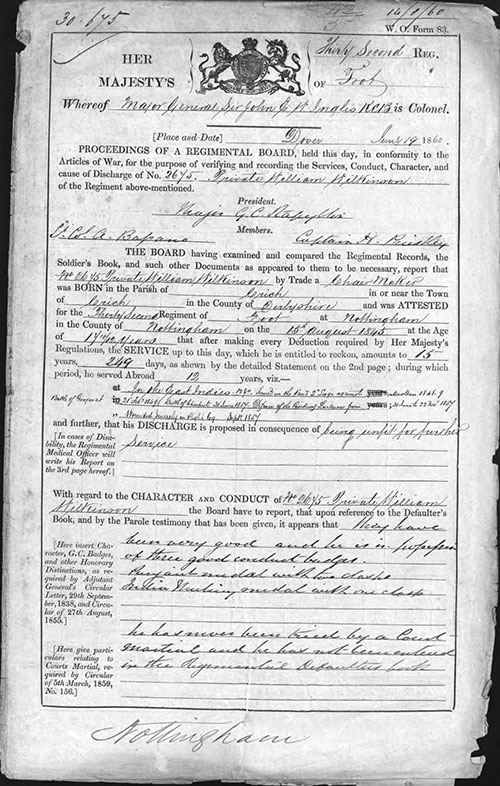 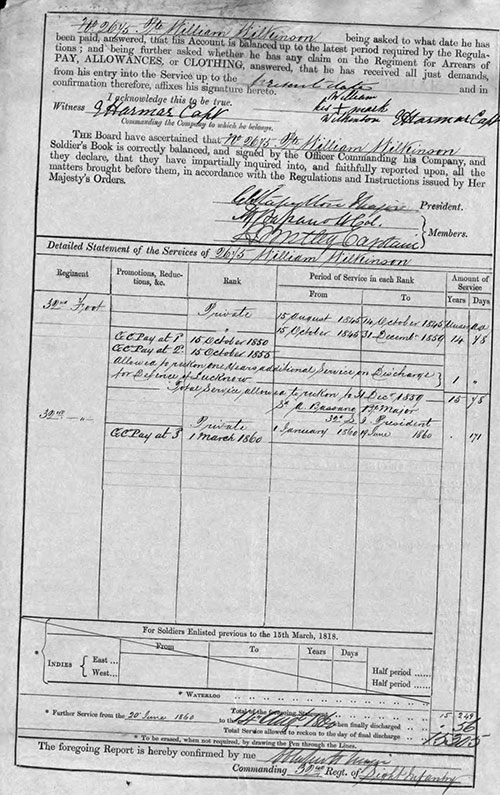 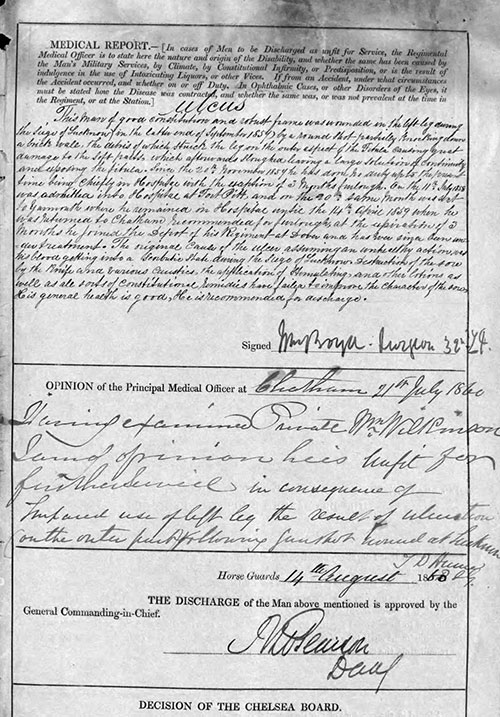 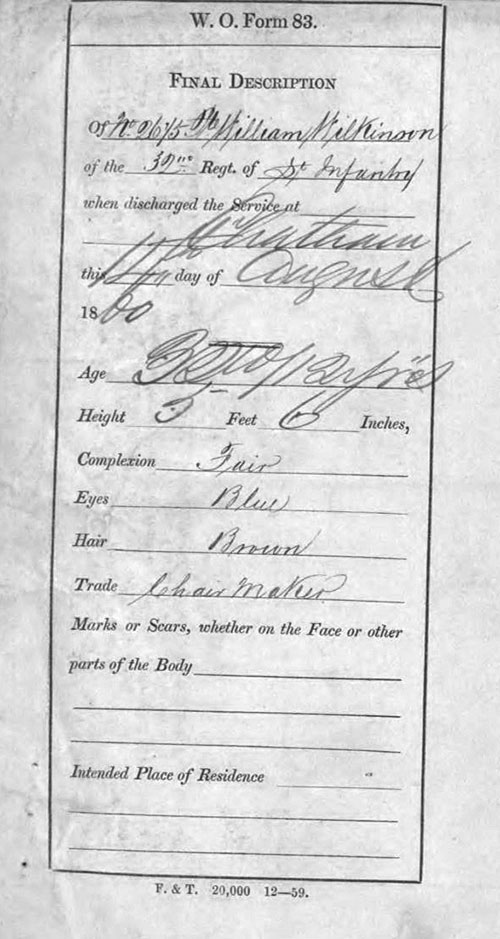 Medals
He was awarded three good conduct badges and two campaign medals:
Punjab medal with two clasps:
Mooltan – 7 September 1848 to 22 January 1849. Awarded to troops engaged in the siege of Multan.
Goojerat – 21 February 1849. Awarded to troops under the command of Lord Gough who defeated the Sikh army of Sher Singh at Goojerat
Indian Mutiny medal with one clasp:
Lucknow – November 1857 to March 1858. Awarded to troops under command of Sir Colin Campbell who were engaged in final operations leading to the surrender of Lucknow and the clearing of the surrounding areas.

Medal report on his wounded leg received at Lucknow
This man of good constitution and robust frame was wounded in the left leg during the siege of Lucknow (in the latter end of September 1857) by a round shot partially knocking down a brick wall, the debris of which afterwards sloughed leaving a large solution of continuity and exposing the fibula. Since the 20th November 1857 he has done no duty up to the present time, being chiefly in hospital with the exception of 3 months furlough. On the 11 July 1858was admitted into the hospital at Fort Pitt, and on 20th the same month was sent to Yarmouth where he remained in hospital until the 14 April 1859 when he was returned to Chatham. Recommended for furlough at the end of expiration of 3 months he joined the depot of his Regiment at Dover and has ever since been under treatment.The original cause of the ulcer assuming an unhealthy action was his blood getting into a senbutic state during the Siege of Lucknow, destruction of the saw and knife and various caustics, the application of stimulating, and other lotions as well as all sorts of constitutional remedies have failed to improve the character of of the sores. His general health is good. He is recommended for discharge.

Having examined Private Wilkinson I am of the opinion he is unfit for further service in consequence of impared used of left leg the result of ulceration on the outer partfollowing further wound at Lucknow.
14 August 1860 .

William's Actions
The Siege of Multan was a prolonged contest between the city and state of Multan and the British East India Company. The siege lasted from 19 April 1848, when a rebellion in the city against a ruler imposed by the East India Company precipitated the Second Anglo-Sikh War, until 22 January 1849, when the last defenders surrendered.

The Battle of Chinhat was fought on the morning of 30 June 1857, between British forces and Indian rebels, at Ismailganj, near Chinhat (or Chinhut). The insurgent force consisted of mutineers from the East India Company's army and retainers of local landowners. On approaching Ismaelganj, the British forces were suddenly fired on by the insurgents, who greatly outnumbered the British, by about 6,000 to 600. The rebels were in well prepared positions, behind stone walls and in the village, and soon inflicted heavy casualties on Lawrence's force, especially the 32nd Foot (which was William's regiment). The regiment's acting commanding officer, was killed, as were several officers. At a crucial moment, many soldiers, especially Indian artillerymen, deserted by going over to the other side, overturning their guns and cutting the traces on the horses also the Sikh cavalrymen fled. As the British retreated towards the bridge over the Kukrail stream, the only access they had to Lucknow, an outflanking movement by the rebel cavalry threatened to cut them off. A charge by the thirty-six volunteer cavalrymen, consisting partly of civilians, threw the rebel cavalry into confusion and a significant part of the force was able to cross the bridge and retreat towards Lucknow. A battery of European artillery occupied the bridgehead, with the intention of dissuading his enemy from following. The artillery had no ammunition left, but achieved their aim of giving the retreating force a breathing space.

The Siege of the Residency. During the retreat, feats of great courage were performed by those who helped wounded and exhausted men to escape. Seeing that the retreat would be generally successful it was critical to organize the defence of the Lucknow Residency. Brigadier John Inglis, commanding officer of William's regiment, the 32nd, had opposed the 'adventure', was left to bring the survivors in. As a last attempt to break the momentum of the rebel pursuit, one company of the 32nd were ordered to hold the final bridge before Lucknow, over the Gumti river. The success of this company and its orderly retreat under enemy pressure, probably helped save many lives.
By about 11:30 a.m, the retreat had been successfully completed. The British Residency at Lucknow was then the scene of the Siege of Lucknow until November 1857. William WILKINSON was wounded in September 1857 just before its sucessful conclusion in November 1857.