He married Frances E. LEATHERLAND in Q4 of 1939, Belper registration.

Derbyshire Times 14 February 1941
Fusilier R.C. CLARKE (24), The Yews, The Common, Crich, is a dispatch rider in the Welsh Fusiliers. He was employed at Sutton in Ashfield. He is married and has one son. 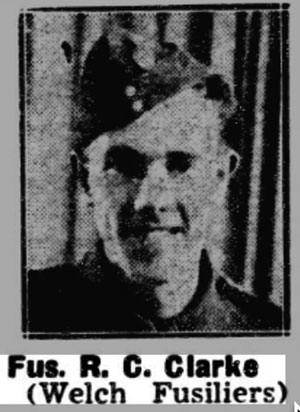 Ripley and Heanor News 4 August 1944
News has reached Mr and Mrs Alfred LEATHERHEAD, of The Green Man Lane, Heage, that their son-in-law Fusilier Rex Castle CLARKE, of the Royal Welsh Fusiliers, was posted missing , believed wounded, on July 2, in North West Europe.
He joined the Forces nearly five years ago, and in civil life was at Morley's Hosiery Works at Sutton in Ashfield. His wife resides at the Common Crich.

For reasons unknown Rex is not named on the Memorial Gates at St Mary's Church, Crich .