Derby Daily Telegraph 19 December 1942
... Four other Derby and district officers who were missing after the fall of Singapore are now reported to be prisoners of war. They are:
[included in the list]
Lieut. Hector William ELLIOTT (27), of the 5th Sherwood Foresters, son of Mr and Mrs C.S. ELLIOTT, Grove House, Crich. 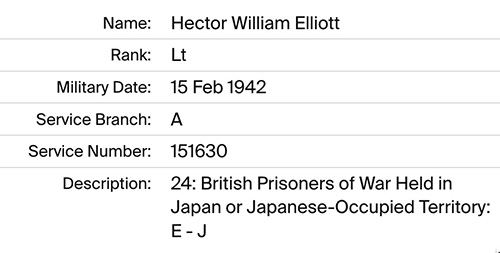 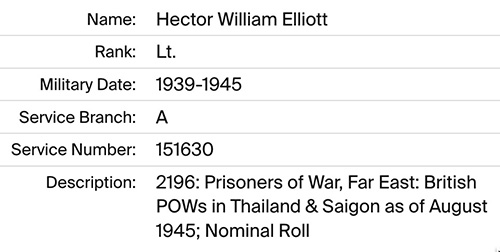 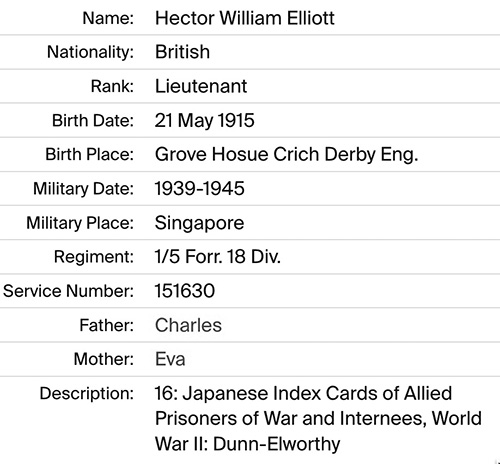 Derby Daily Telegraph 7 September 1945
Letters received from two officers in Bangkok today gave the first lists of Sherwood Foresters and other officers known to be safe and well, and awaiting final liberation in prisoner-of-war camps in Siam. Men of the Foresters suffered terrible hardships during the early days of their captivity, and it is not known how many died as a result of the brutality of the Japanese.
The list of Sherwood Foresters officers given by captain THIRLBY as being well at the time he wrote to the letter on August 27, in addition to Col. LILY, is:
[there followed a list of names including…]
Lt H.W. ELLIOTT, of Crich, son of former manager of the Ripley branch of the Midland Bank.

Derby Daily Telegraph 17 September 1945
Arrangements for getting released prisoners of war home from the Far East and as soon as possible appears to be well in hand from the tone of telegrams and letters which continue to flood into Derbyshire and district over the weekend. Some men write that they have arrived in Australia on the first stage of their journey home, but the majority of the Sherwood Foresters seem now to be in India, waiting for the next stage. Several men write they have been told they will be flying home soon. Sherwood Foresters in the latest list from whom news has been received include:
Lt Hector William ELLIOTT (30) of Grove House, Crich.

Derby Daily Telegraph 20 October 1945
There were more emotional reunions at Derby LMS station this afternoon when the “repatriate special” carrying ex-prisoners including Foresters who disembarked yesterday from Orduna, arrived nearly an hour late. Forrester officers in the train were:
[a list of names including …]
Lt H.W. ELLIOTT, of Crich.
There was hot tea ready for the men at Derby and transport waiting to take them home.

Ripley and Heanor News 26 October 1945
Sherwood Foresters who arrived on Saturday night included:
[there followed a list of names which included …]
Lieut. ELLIOTT of Crich.