Michael JESSOP as Crich solicitor was frequently recorded in newspaper reports. He was also one of those professional residents who was a benefactor and supporter of the community.

Michael's wife Eliza died in January 1852 and he later married widow Mary Radford Richardson LEE on 27 May 1852 at Crich; she was the daughter of John SAXTON. 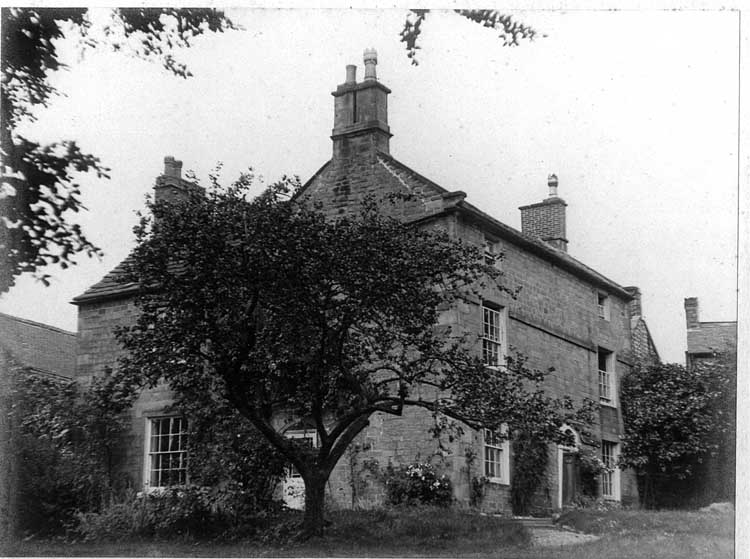 The Mount, home of Michael Jesson and family

During 1864 there was a very famous court case called "The Great Matlock Will Case" in which Michael JESSOP was an Attorney for the Defendants. This legal conflict was over a will and its disputed codicils. This was widely reported at length in the newspapers of the time. Eventually it ended up being decided in House of Lords. There were at least two books written about the case.
The case centered on the validity of alledged codicils to the will of George NUTALL, of Matlock, who died on 7 March 1856 . His will left most of his real estate to a John NUTALL, who died soon after him. Then, over the following 18 months, at different times and in different circumstances three codicils to the will were found. The effect of these codils was to give most of the real estate previously bestowed on John NUTALL and his children to John ELSE and Catherine MARSDEN. The validity of these codicils was then hotly disputed giving rise to the several subsequent court cases. The first case was heard in 1859 at the Derby Summer Assizes. The beneficiaries under the original will claimed that the codicils were forgeries and should be set aside. However, the jury found in favour of the validity of the codicils. The Master of the Rolls was not satisfied with this judgement and directed a second trial before the Lord Chief Baron at the Derby Spring Assizes of 1860. This jury were of the opinion that the codicils were not valid and that the original will should be actioned. The Master of the Rolls was satsfield with this verdict and refused a new trial. Then there was an appeal to the Lords Justices, who were equally divided. The next appeal was to the House of Lords who decided in favour of a new trial in London before the Lord Chief Justice of England. After an eight-day trial the jury upheld that the codicils were not vald and that the terms of the original will be unheld. It was reported that the jury were out for half-an-hour and their verdict was met with applause and the cordial approval of the great body of those who had heard the case.
Michael JESSON as the successful attorney was highly feted and returned to Crich as a "conquering hero." His hero's return was recorded at length in the newspapers:

More about the Great Matlock Will Case VIEW 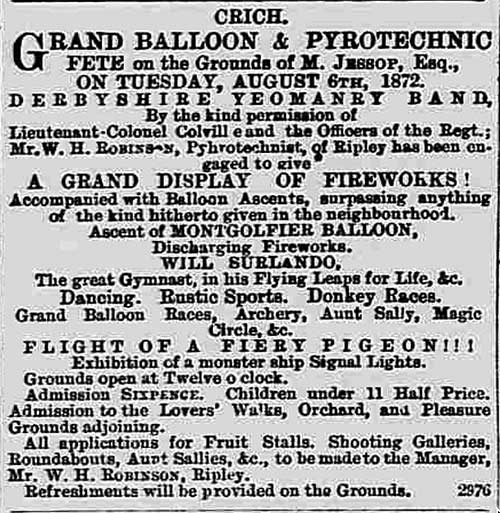 [This was held in the grounds of Michael JESSOP]

Derbyshire Times and Chesterfield Herald 5 July 1873
We regretted to record in our obituary last week the death of an amiable and kindly gentleman whose face was familiar to many of our readers, and who was widely respected. We refer to the late Michael JESSOP Esq, of Crich, solicitor.

Derbyshire Times and Chesterfield Herald 21 November 1874
Notice is hereby given, that all creditors and other persons having any claims or demands against the Estate of Michael JESSOP, late of Crich, in the county of Derby, gentlemen, (who died on the 25th day of June, 1873, and whose will was proved on the sixth day of January, 1874, by Samuel LEECH, one of the executors therein named). Are required on all before the first day of December next to send in particulars of such claims and demands to the said Samuel LEECH …