There were both Primitive and United Free Methodist chapels at Crich Carr.

Kelly's 1887 Directory: CRICH
The Baptists have a good place of worship here. The United Methodist Free Church was built in 1864, they have also chapels at Crich Carr and Wheatcroft. The Primitive Methodists have chapels at Crich, Crich Carr, Fritchley, and Morewood Moor. The Wesleyans have a small chapel. The Congregationalists have a chapel at Fritchley There is a mission church at Fritchley, one mile south east, built in 1870 and contains about 150 sitting; it is also used as a day school, and was enlarged by the addition of an infants' school room in 1874. There are also at Fritchley, Congregational and Primitive Methodist chapels.

The lower chapel, near Middle Lane, was a United Free Methodist and the upper chapel, just above Top Lane, was the Primitive Methodist. 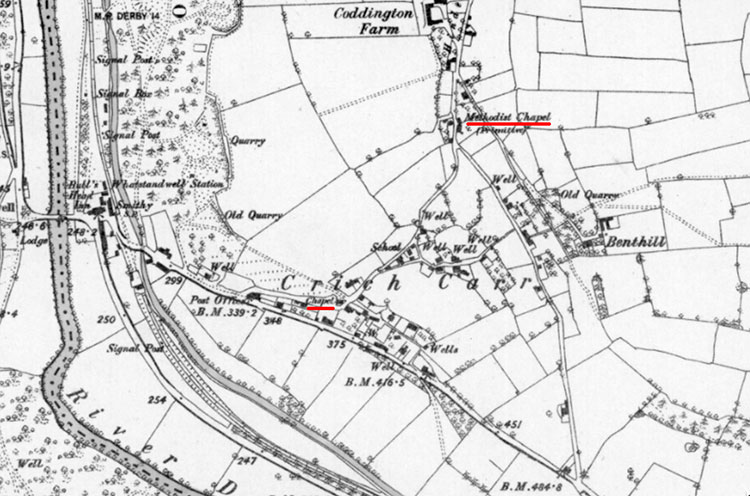 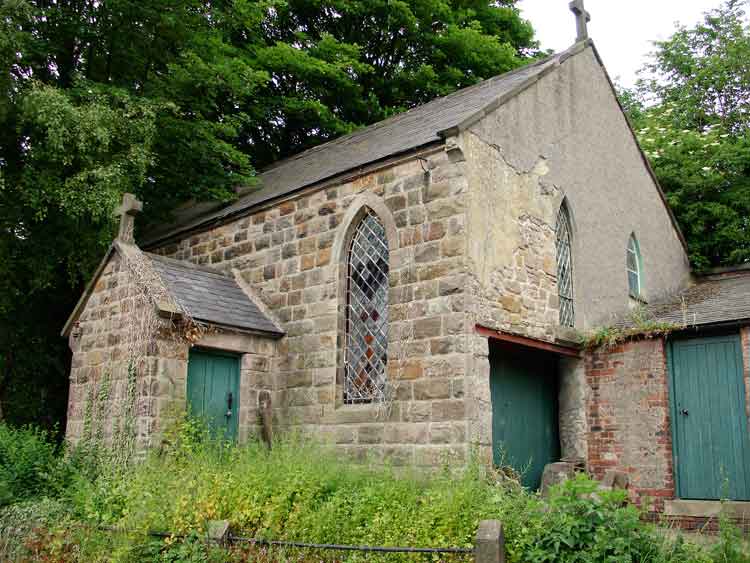 A newspaper report of 1872 reports the re-opening the United Methodist Free Chapel.

Derbyshire Courier 20 January 1872
CRICH CARR
REOPENING OF THE UNITED METHODIST FREE CHURCH
The reopening services of this place of worship were commenced last Sunday, when sermons were preached by the Rev T.M. BOOTH, of Burton on Trent, afternoon and evening, two large congregations. This chapel has undergone an enlargement of about one third its former size, a portion of the interior has been re-pewed, and a Gothic entrance has been added. The interior of the chapel now presents an exceedingly neat and comfortable appearance. John SMEDLEY Esq, Riber Castle okay darling, has given new windows, a large portion of the roof, and a new stove and fittings. The cost of the alterations is to be paid for by voluntary subscriptions and collections, a handsome sum having been already obtained. The services are to be continued next Sunday by Mr J.W.NUTTALL, of Ripley in the afternoon, and Rev A.B.MATTHEWS, circuit minister, in the evening. On the following day a public team meeting will be held on behalf of the same object.

Derbyshire Times and Chesterfield Herald 20 July 1872
CRICH CARR
METHODIST FREE CHURCH SABBATH SCHOOL ANNIVERSARY
On Sunday week two sermons were preached by Mr HUTCHINSON, Ripley. Pieces were recited and hymns sung by the children, which gave great satisfaction. The weather being unfavourable the service were not so successful as the former year. A public tea meeting was held on Monday evening after which a public meeting was held and addresses were delivered by the Rev A.B.MATHER and others. The meeting on Monday was very well attended.

Derbyshire Courier 22 July 1837
Crich Carr-on Sunday last the 16th instant, the Sunday School Sermons for the Primitive Methodist school, at Crich Carr, near Cromford, were preached in the open air (the chapel being far too small for the occasion) to very large audiences, by the Rev W Stokes, of Burton upon Trent. The collections exceeded those of former occasions, and testified the attachment of the people to the increasing schools of that picturesque village.

A second chapel was built around 1845. Its opening was reported in the press –

Derbyshire Advertiser and Journal 13 August 1847
Crich Carr – on Monday last, the children belonging to the Primitive Methodist Sunday school were regaled by their teachers and friends with tea and plumcake, in the newly erected chapel belonging to that society of Christians.

Oral local history states that the original chapel was rather small with a tin roof.

A third Primitive Methodist chapel was built on Top Lane to replace that built in 1847.

This chapel was shown on a map of about 1882. The map also shows the United Free Chapel but has no mention of where the original Primitive Chapel once stood as shown on the 1879 map. 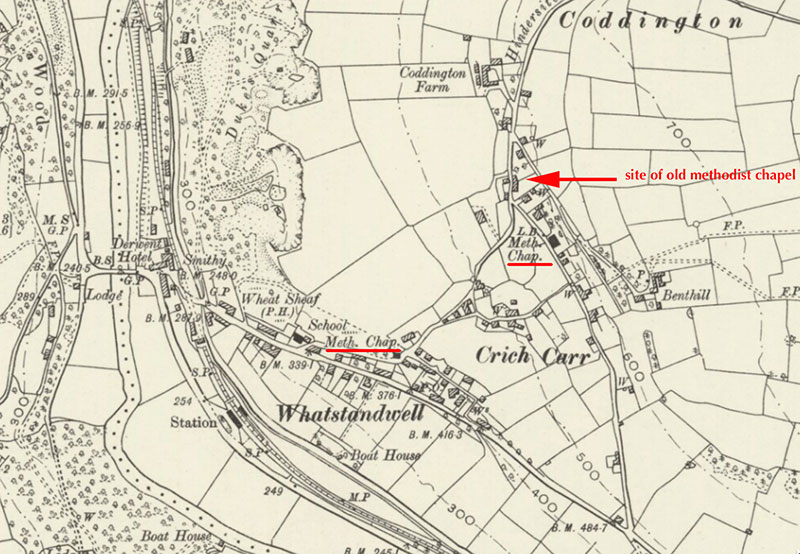 The opening of the new Primitive Methodist Chapel on Top Lane was reported in the press:

Derbyshire Times and Chesterfield Herald 27 April 1878
Opening of a new chapel at Crich Carr near Belper
A new chapel in connection with the primitive Methodist body, was opened for Divine worship at Crich Carr, in the Belper circuit, last week. For nearly 40 years the primitive Methodists have conducted a public worship, and taught a Sabbath school, at Crich Carr, in the year 1845 they erected a small chapel, which will seat about 100 persons. This chapel has been made to serve for all purposes until the present time. It has however been long been inadequate for the accommodation of the congregation and the Sabbath school. It was therefore resolved some 18 months ago to make an effort to raise new and better premises. While deliberating on the matter, the society found a friend in Mr John Sims, of Crich Carr, who kindly offered to give an eligible site of land on which to erect a new chapel and schoolroom, the stone required, in the erection and £100 towards the cost thereof. 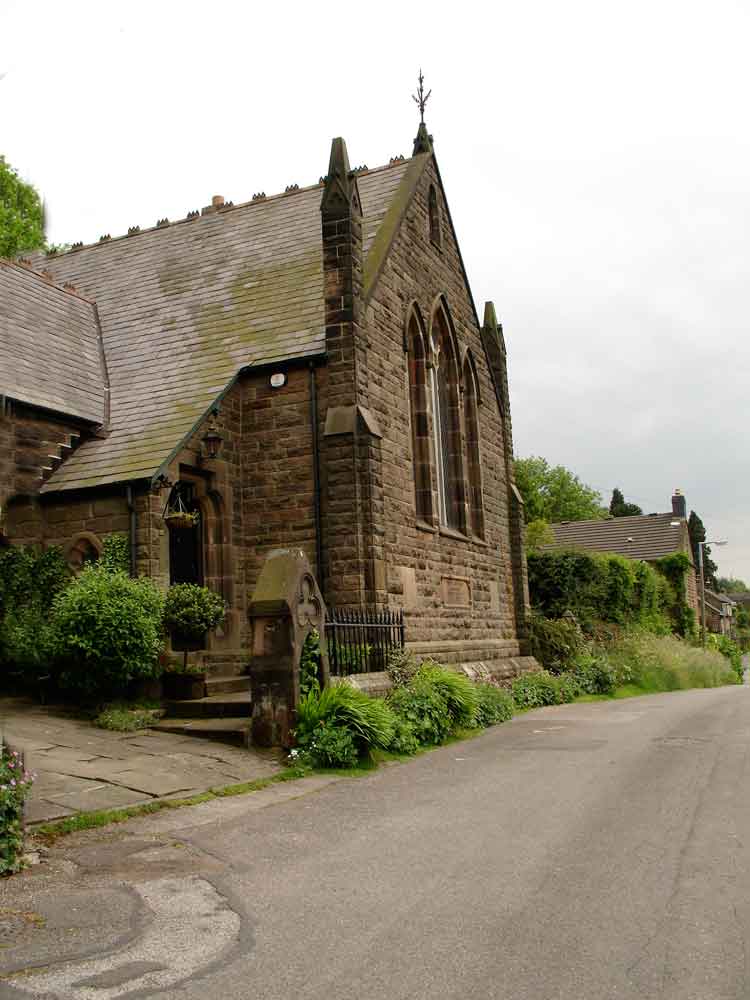 The relacement Primitive Methodist chapel on Top Lane, completed in 1878

This was built with stone donated from a local quarry by John Sims who also provided the site and £100 towards the cost.

There was a race on with the Crich Baptists to see who could finish their chapel first. The Crich Carr Methodists claimed a moral victory.

It is now a private dwelling.

With thanks to Ronnie LYNAM, Alan PERRY and Eric BOWMER for information received.