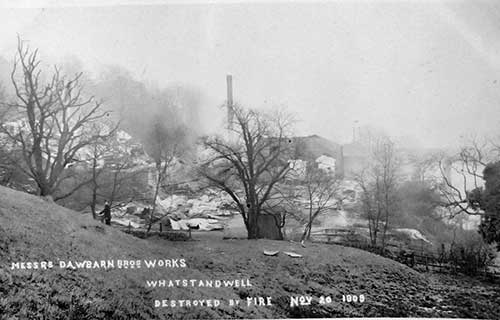 Derby Daily Telegraph
22 November 1909
TIMBER WORKS GUTTED NEAR MATLOCK
£10,000 DAMAGE
Early on Saturday morning the timber works at Whatstandwell belonging to Mr R Yelverton Dawbarn, JP, who resides at Wood End, Matlock were completely destroyed by fire.
Mr Dawbarn took over these works some years ago from the late Mr Stones of Ashfield, Matlock, and he greatly extended the plant, the yard now covering a great area between the Cromford to Langley Mill canal and the Manchester to Derby main railway line. Where on Friday night there stood a tremendous stock of timber, shedding and plant, nothing is now left but debris and charred wood.
The fire broke out between one and two o'clock on Saturday and spread very rapidly. In an incredibly short time the whole the yard was involved in a conflagration which lit up the countryside for miles. Many villagers, startled by the glare in their windows, left their beds.
Two fire brigades, one from Lea Mills and one from the Midland Railway, quickly arrived but their task was hopeless. Nothing could have prevented the destruction of the works.
The cause of the outbreak is not known. This suggestion was made that it might have had its origin in the carelessness of a tramp, as men of this class occasionally gain access to the premises, and fears were entertained that if this were so human remains might be found among the debris. Every care has been taken in the search, but up to the present nothing to substantiate this theory has been discovered.
The loss is variously estimated at from £10,000 and £12,000. The property, it is understood is insured. Mr Dawbarn is the chairman of the West Derbyshire Liberal Association.
Mr Benjamin Elliott, captain of the Lea Hosiery Mils Mills Fire Brigade, in the interview said: the fire was reported unofficially to us at the mills at 1.30 by a man named Ollerenshaw, and without waiting for an official invitation, Major Lea, who had been informed – he is one of the firm of Messieurs John Smedley Ltd – ordered our brigade to give assistance.
We arrived on the scene about two o'clock, and found that the Midland Railway Fire Brigade from Derby had just got to work to protect the bridge and the rails on the Manchester to London line. The whole place was in flames and it was hopeless from the very first. We remained until four o'clock, by which time it had become evident that we could be of no further service.
the buildings, including everything of value, have gone. The only items saved were the safe, which was got out of the offices and a few bits of office furniture. This stable was also emptied of its horses before the fire reached it. One shed alone contained 1000 doors.
Mr Dawbarn was an impotent spectator of the destruction of his property. It is stated that there was no night watchman on duty at the works on Friday night. Had the wind had been blowing in the opposite direction the houses at Robin Hood, which is only just over the canal from the works, would have been destroyed. Fortunately the sparks and fragments of burning wood were blown in the direction of the River Derwent.
There was an ample water supply, but it was impossible to save anything. The heat in the neighbourhood of the works while the fire was in progress very great, and the whole district was flooded with lurid light.

The factory was rebuilt, but in 1935 burned down yet again. 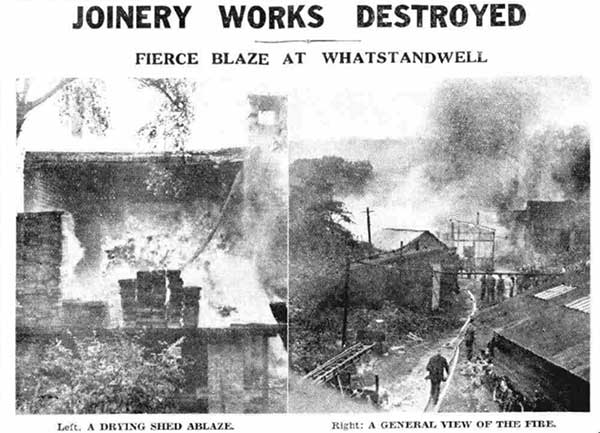 Several thousands of pounds worth of damage was done and about a 120 men were thrown out of employment by a fire which completely destroyed the joinery works of Messrs Yelverton Dawbarns Ltd at Whatstandwell, early on Tuesday. Within an hour of the outbreak being discovered, the whole of the extensive works was a mass of fiercely blazing wood and the fire brigades which were summoned had not the slightest chance of saving any of the stock or actual works buildings.
The office building, the petrol and oil store, and a blacksmith shop, all of which are separated from the works by a few yards and are detached buildings, were saved, but the end of the office is nearer the works became involved. The buildings destroyed included the joinery shops, three machine shops, engine house, storeroom, wood drying building, and boiler house. Many thousands of doors, window frames, and staircases, which are the principal products of the firm were destroyed.

TWO BRIGADES SUMMONED
the outbreak was discovered at about 5.55 am by Mr S Jackson, who resides with his parents at Robinhood, Whatstandwell across the canal from the works. He drew the attention of his father to the fire, and dashed off on his bicycle to raise the alarm. Belper and Matlock Fire Brigades were summoned by telephone, but since Whatstandwell is outside the area of both brigades the permission of the Clerk to the respective councils had to be obtained before the brigades could set out. Some delay was therefore unavoidable.
In the meantime, local residents hurried to the works to render what assistance they could, but the extent of the flames, which spread with amazing rapidity, made it obvious that nothing could be done to save any part of the works. The local helpers assisted Inspector Brooksbanks, Sgt Salt and PCs Thornton and Fielding to save the documents and contents of the office carrying them to a place of safety, but the works themselves soon resembled a raging furnace.
The Matlock Brigade, under the captaincy of Mr F Flint, arrived at 7.5 and quickly ran out two lengths of hose, concentrating on preventing the fire gaining a hold on the office and blacksmith shop. At 7.20 the Belper Brigade, captained by Mr A White joined efforts with the Matlock Brigade, running out to more lengths of hose. By this time the ends of the office and blacksmith shop had become involved, but powerful streams of water from the river nearby saved these buildings.

FLAMES 80 FEET HIGH
The four jets of water were then directed on the works generally, but the dry wood, some of which was painted and varnished, burned like tinder and the water made little or no impression. Flames roles to a great height, sometimes as high as the works should stack, which is in the neighbourhood of 80 feet. Fire raged at its base several hours, and fears were entertained for its safety, but it survived, to be almost the only part of the works remaining upright.
The fire continued throughout the day, with both sets of firemen working heroically, and it was not until 6.45 pm after almost 12 hours work, that the brigades felt it safe to leave. Even then the greater part of the works were still smoking, and there were fierce small fires in various parts, but it was decided that no further damage could be done, although it was anticipated that the fire would take another 24 hours to burn itself out completely.

NEW MACHINERY DESTROYED
The gutted buildings were built of brick, corrugated iron, asbestos and concrete, and only a few of the walls remained standing. When roofs collapsed huge showers of sparks were thrown up. Several departments of the works were recently equipped with new machinery, all of which were destroyed together with two motor trucks and all the tools of the workmen. The works clock, on the outside wall of the blacksmith shop, defied the intense heat. Although the glass was cracked and its case chard it continued to keep good time throughout the day.
The cause of the outbreak is unknown, but two possibilities have been forward. One is of the works were struck by lightning during the storm the previous night, and the other is that a spark from a passing train ignited some inflammable material of which there were plenty at the works. The main road from Manchester to Derby runs within a few hundred yards of the works at a slightly higher level, and at an early hour it was lined with people who had come in cars to watch the fire. During the day hundreds of people visited the scene from all the surrounding villages.

A PREVIOUS FIRE
Workers at the factory are drawn from Belper, Ambergate, Whatstandwell, Matlock, Crich, Alderwasley, Lea and Holloway, and other places, and some of them are said to have lost tools to the value of from £20 to £40.
This is the second time that the Whatstandwell works of Messrs Yelverton Dawbarns Bros has been destroyed by fire. The previous fire was 28 years ago, and on that occasion also the chimney stack was practically the only part of the works that were saved. The works were not reopened for about a year, and the prospect of those thrown out of employment by the present disaster resuming work at an early date is very remote. 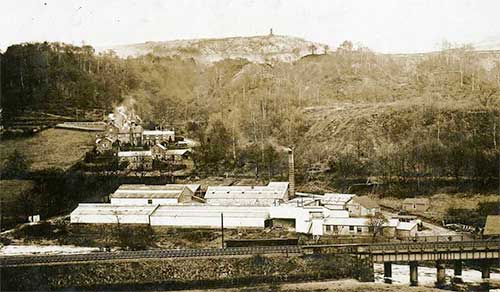 The steam works before 1936

After the fire, in the 1940s , Kirk & Taylor has a small factory for a short while. This was taken over by a foundary owned by Mr Heatherington. The foundary closed in 2015.