Reproduced below is a village trail through Fritchley which was produced by Fritchley Festival Fundraisers (date unknown).

The original booklet incorporated a History of Fritchley which has been transcribed by Keith Clark elsewhere on this site (use the link to view).

The booklet was courtesy of the late Dr G Dawes.

FRITCHLEY VILLAGE TRAIL
A GUIDED WALK TAKING YOU ROUND FRITCHLEY AT THE TURN OF THE CENTURY. 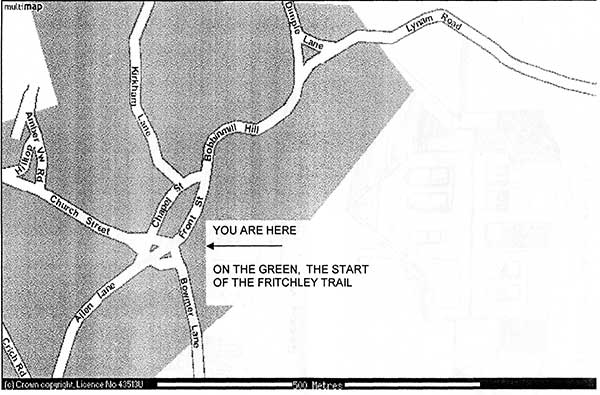 FRITCHLEY IN 1900
Cast your imagination back one hundred years to Fritchley village as it was in 1900. The village is smaller than it is today, with most of the houses clustered round the Green, although the population of about 500 is only 100 less than today. The houses are mainly small and the families large by today’s standards. If there is any spare room, a boarder might be taken in to help pay the rent. The richer families have live-in domestic servants.
Most villagers work in the village. Some work from home, many in the framework knitting and allied trades. Some work on the land, there are five farms employing many farm workers. Some work in the village shops and workshops, providing services for the other inhabitants. Others work at nearby quarries and mills, the lime works at Bull Bridge, the wire works at Ambergate, or as general labourers wherever the work is to be had. Children leave school at 13, unless they are bright enough and rich enough to go onto high school.
There are no cars, and no tarmac on the roads. Transport is by horse and cart, or for most people, on foot. Donkeys laden with coal deliver to the village homes and people walk long distances carrying goods for sale. Many people will not leave the village from one year to the next. They have no need to; it provides them with their livelihood and their needs.

THE 1900 VILLAGE TRAIL
All places featured in this walk are numbered. A map of the village is provided on the back page.
Starting on the Green, proceed down Chapel Street, to the left of the Congregational Chapel.

The trail starts at THE FRIENDS MEETING HOUSE. It was built three years ago, in 1897, to replace our previous meeting house near the Bobbin Mill. The Quaker community in Fritchley was started by John Sargent who moved into the village in 1863. He was unhappy about recent changes in the Society of Friends and so he started a breakaway meeting in Fritchley. He was soon joined by like minded Quakers and other converts and now Fritchley boasts a large and active Quaker community. About 50 friends attend meetings for worship on the 1st day (Sunday) and 4th day (Wednesday). We continue the Quaker traditions of plain living. We use plain speech, we wear plain dress, we do not swear oaths, drink, smoke or gamble.

Turn right out of the meeting house, towards the Green. A few yards on the right we find

2 THE COBBLERS SHOP (now a house)

Only the well off villagers use the cobbler, the others repair their own shoes at home. The cobbler occupies the right hand end of the building, the middle is a house and the single story extension to the left is a framework knitting shop. On the end of the building is one of the gas street lights, lit by the lamplighter each evening. At the far end of the gardens is the privy shed. The house was at one time thatched. When the thatch was replaced a sword was found which is said to have been hidden there after the Pentrich Revolution in 1817.

Continue to the Green.

This is the heart of the village, a resting and meeting place for villagers and travellers alike, while the old stone drinking trough (now removed) provides refreshment for horse* The Green really comes to life on pigeon racing days! Here the pigeon racers have their clock. When the pigeons come in you will see young men racing to the clock at break-neck speed to record the pigeon times. There are several pigeon lofts in the village and the sport is taken very seriously.

Facing towards Chqpel Street is the Congregational Chapel

The chapel was built in 1841, although the front has been rebuilt since then. It has connections with the Presbyterian Church at Heage. A new school room has just been added behind the chapel to house the Sunday school.

With the Chapel behind you, walk towards the hill, keeping to the right of the Green, to the bottom of Chapel Street

5 THE SHOULDER OF MUTTON PUBLIC HOUSE (now a house)

At the bottom of the hill on the left is the Shoulder of Mutton Public House, with Hardy’s Kimberley Ales and Stouts, painted onto the stonework (traces of this can still be seen). This is the livelier of the two village hostelries, with the sound of singing often drifting out towards the end of the evening. On the track behind the Shoulder of Mutton is the village smithy (now closed). Here horses are shoed and all other kinds of ironwork made and mended.

On the opposite side of the road is Fritchley’s Farm (now Church Farm). This farm has been owned by the Fritchley family for several generations. The original farm is the first building with the barn and the farmhouse built together. This was built using the old ‘cruck-beam’ method. The next building up the hill is the present farmhouse, and was also until a few years ago the Bluebell Inn.

Further up on the right is Mutton Row. This long row of stone cottages (now with gaps) is home to some of the poorest villagers. Not many years ago there was said to be a pigsty in the garden of every cottage.

8 THE VILLAGE SCHOOL (now a house)

On the other side of the road is the village school. It was built in 1869, on land bought by Annie Hurt for £50.00. It is provided with an oak altar, organ and other fittings for it’s other use as a mission room on Sundays for the Church of England. Originally, it was a single room with one teacher and 180 children. Since then it has been extended twice and now has three classrooms, and an attendance of 150.

Further up the hill on the right, we come to the Primitive Methodist Chapel. This was built in 1829 and rebuilt in the 1850’s after it had fallen into disrepair. It houses a memorial to the famous stocking knitter Henry Suller, who exhibited at the Great Exhibition and made stockings for Queen Victoria.

10 THE HOME OF GEORGE CHELL

A little further up the hill on the left we see the home of George Chell, with his stone “George Chell Millright and Engineer 1864” set high in the wall. George Chell re-designed the windmill at Heage a few years ago, increasing the number of sails from four to six.

This area was the main Framework Knitting centre of the village. When the industry was at its peak between 1830 and 1850 the air would be full of the sound of looms. The industry has declined steadily since then, but still employs about ten people in the village. The workshops can be distinguished by the long rows of small paned windows designed to allow in plenty of light for the highly skilled knitters to work their complex looms. (Little evidence remains today)

At the lane junction we turn right. An excellent view of the village is apparent from this vantage point.

In front of us, on the other side of the valley we can see Barnclose Farm, farmed by Jesse Darbyshire, an elder of the Quaker meeting. On the hill beyond the farm stand the remains of Thorpe Hill windmill, which fell into disuse about 1820. The view extends over Ripley.

Rejoin Church Street, and return to the Green

On the opposite side of the Green to the right (behind the phone box) is the village shop. This is run by Thomas Davidson, a member of the Quaker meeting. The post office is here, and a full range of groceries and clothes are stocked. Bread is baked here, coffee is ground and tea is blended. All goods are marked with their price, as is the Quaker way, so haggling is avoided.

Continue down the lane to the left of the shop

On our right we see the Old Farm. This is reputed to be the oldest building in the village, dating back to at least the 17th Century. It stands on the site of the first mention of Fritchley back in 1309. The busy farmyard extends along Bower Lane (now new houses). This lane is said to be the oldest roadway into Fritchley and leads to the village tip in the old quarry, then via a cart track to the Canal at Bullbridge.

Continue down Front Street to the junction with Chapel Street.

At the junction of Chapel Street and Front Street we cross over the Gangroad tunnel (now filled in). The gangroad is the local name for the tramway which carries the limestone from the quarries at Crich to the lime kilns and canal at Bullbridge. It was built in 1793. The trucks were pulled by horses until 1860 when steam locomotives were introduced. In 1813 the line was used for trials of an extraordinary locomotive known as Bruntons Steam Horse. The machine was carried on wheels but propelled by jointed legs fitted behind it. It was later used at Durham Colliery and after two years exploded. Expansion has taken place recently with extra capacity being introduced to the lime kilns to meet growing demand.

At the brow of Bobbin Mill Hill, to our right we see Chestnut Bank. This houses the Quaker school (now closed) set up in 1882 with money bequeathed by Matilda Rickman, one of the original members of the Fritchley Meeting. This is also the home of Henry Wake, antiquarian and bookseller. He designed Thomas Carlyle’s bookplate and is famed throughout the country for his beautifully illustrated and hand drawn catalogues. Until recently there was a saw-pit in front of the house where two men could be seen working with a two handed saw, one above, one below.

To the left of Chestnut Bank is Fernside, the house that John Sargent bought when he moved to Fritchley. On the field behind the house the local lads play their cricket matches.

At the bottom of the hill

At the bottom of the hill, to the left, behind the cottages (no longer standing) we see the site of the Bobbin Mill. The mill was built in 1790 as a corn mill and in 1816 converted to manufacture wooden bobbins for the textile mills in Cromford, Belper and Milford. It was destroyed by fire in 1885. The night of the fire is well remembered by the village with over 50 people forming a bucket chain from the dam at 3 o’clock in the morning, however we could not prevent the mill from burning to the ground. There is a corn mill still operating upstream from here at Mill Green and another downstream which closed about ten years ago. To our left is the old cottage meeting house (now demolished) converted from two cottages in 1870.