In the 1940s this event was nearly disastrous. On the Saturday before the pilgrimage march to the Stand someone lost the key to the Tower. The normally calm warden Mr Ike Woolley showed signs of extreme concern (ex Sergeants of the Sherwood Foresters do not panic). What to do? Norman Smith, the local builder, was sent for to see if he could find a way of opening the door. He arrived with John Leaf and Bert Haslam. On examining the solid oak door with just a key hole in it, only two options seem viable. Cut into the door, or somehow get to the other side of the door and remove the box lock from the inside. Damaging the door was firmly ruled out. Someone, somehow must be got down inside the tower.

Well known in the village for his total lack of fear of heights was Frank Heapy. Bert Haslam went off in the lorry to collect ladders and Frank Heapy was sent for. Both returned with sightseers. Several long ladders were then lashed together so that they almost reached the platform level of the tower. Despite the precarious use of ladders up Frank went, to find the ladders were a tad too short and the angle just a bit steep to easily get into the tower. However, he managed to get a rope around one of the stone columns and with a scrabble he managed to heave himself onto the platform inside. Lowering a rope, a bag of tools was attached, which he pulled up. Then he went down inside the Tower to the bottom where, after a bit of struggle with stubborn screws, he managed to remove the lock and open the door to a mightily relieved warden Ike Woolley. Norman Smith was then able to replace the lock complete with key, thus allowing the parade to take place as if no mishap had occurred.
Frank Heapy certainly saved the day.

Frank's climbing ability also came in useful during Crich Fairs. One of the side attractions was a tall, very greasy pole on top of which was a flitch of bacon. If anyone could reach the bacon it was theirs. Inevitably it was Frank who managed this seemingly impossible task.
Recounted by Harry Thorpe

Later, in 2012, Peter Woolley admitted to Peter Patilla, the editor of Crich Area Community News, that it was he who had lost the key. 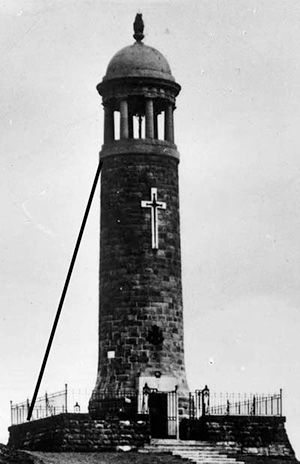