Reference is made to Crichware on the HeritageGateway site as follows:

Full Description
Pots were made at Morewood Moor through a great part of the 17th century. Around the turn of the 17/18th centuries the potteries were conducted by successive members of the Dodd family. "I have seen salt-glazed vessels of a very early date which were made at Morewood Moor". From there the manufacture was brought to Alfreton by George Bacon, c. 60 years ago [ie c. 1752] but the works are now [1812] disused though another one is still in use. (1)

There was formerly a brownware pottery at the Manor House at Morewood Moor. (2)

In the summer of 1904, William Turner and Micah Salt cut a trench, 6ft x 4ft x 3ft deep, across the refuse pit of a pottery near the farmhouse [or manor house ]. Sherds of salt glaze, white and brownware, etc., indicated the former existence of a considerable pottery. An underground cellar-like place, no doubt used for storage, was also explored. The pottery probably began in the last quarter of the 17th century and died out in the late 18th century. (3)

[SK 35245642] Manor House farmyard is placed upon a large mound of pottery-kiln debris. Drainage-trenches recently dug in the farmyard show layers of charcoal and burnt clay and contain typical debris - saggars, blocks, perforated bricks burnt stones and tile. Many are covered in glaze and potsherds found include fragments of brown-glazed beakers, bottles and jugs. Similar material is visible on the surface of the mound's slopes east of the farmyard. The mound suggests that the kilns were in the immediate area of the farmyard in close proximity to the significantly named Pothouse. Most of the farmyard buildings are modern and the others are nondescript buildings of stone with no evidence of any use in the manufacture of the pottery. (4, 5)

In 1666 Thomas Morley, potter, took over a plot of land at Crich from Lady Mary Dixie. A Thomas Morley of Weir Mill, Wingfield Park, potter, owned a pottery on Morewood Moor, Crich, and sold it to Thomas Dodd about 1727. Dodd was bankrupt in 1763 and there is a bankruptcy sale of property on Morewood Moor, Crich, which included potters' clay ground and two potworks occupied by Thomas Wheldon. George Bacon took over the potworks, followed by his son Edward, who converted the potworks into a brickworks, and closed it by 1810. In 1772, bricks were obtained from George Bacon at Crich to build the pottery at Wirksworth. An advertisement in the Derby Mercury of 11 February 1780 reads: 'Sale to be held by private contract. A freehold estate situated at Hollins in the parish of Crich in the County of Derby tythe free and well tenanted. In part of the premises there is a valuable bed of potters clay with good potworks and every convenience for carrying on the business in an extensive way. Apply to Thomas Alsebrook at Crich'. Crich Pottery made brown salt-glaze stonewares. A number of these survive, including one in the Castle Museum, Nottingham marked 'Crich 1701'. (9) 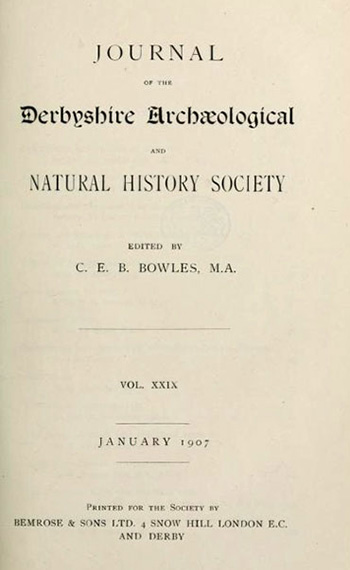 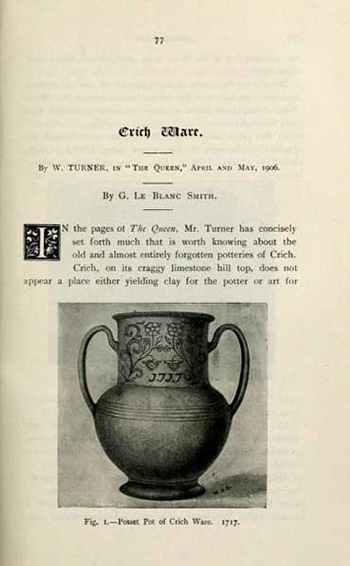 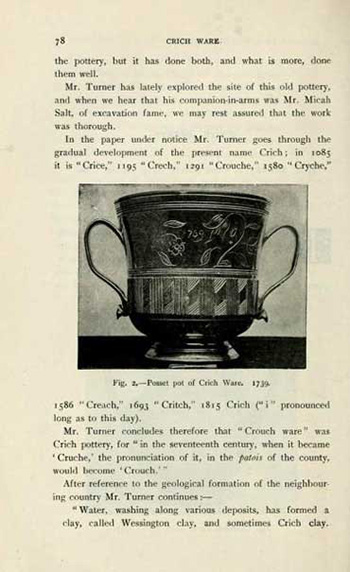 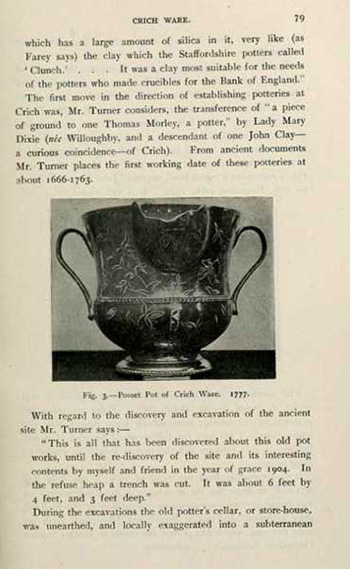 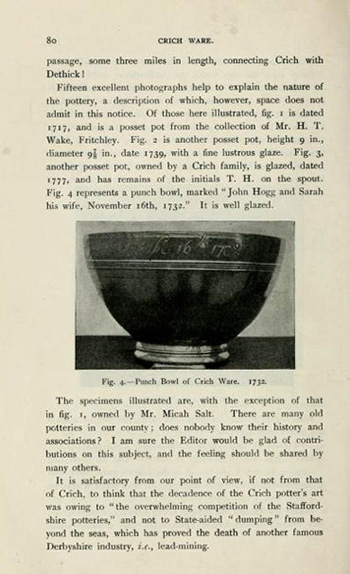 Janet M. Bower has been a local resident for 30 years. She is interested in the history and development of Crich, painting, art history, and gardening. She is a member of Fritchley W.I. and a voluntary social worker

SEVERAL potteries existed in east Derbyshire during the 18th century producing brown saltglaze stoneware, very similar to that made by the contemporary Nottingham Pot Works.
One such pottery was situated near Moorwood Moor in the parish of Crich, where land was acquired by Thomas Morley, a Nottingham potter. A manor house and pot works were erected by him in 1690.

Local clay and coal were available and rock salt was brought from Cheshire.
The ware produced was of high quality, fine section and elegant design and distinguished by the metallic appearance of the glaze.

Examples which have survived include jugs, loving cups, a punch bowl, a monteith and a posset pot. Several pieces are decorated with rouletted flower sprays, beading, punching and incised inscriptions, while double walled vessels have carved pierced patterns.

The earliest known named and dated specimen is a jug in Nottingham Castle Museum inscribed ‘Crich 1701’.

The monteith, with a scalloped rim to hold wine glasses by the stems modelled in the style of a silver vessel, is extremely rare and is inscribed ‘Gulielmus Flint, Crich 1704’.

In 1725 the pottery was acquired by the Dodd family, one member Thomas Dodd being described in an indenture of 1763 as ‘late of Crich, a bankrupt potter.’

The Crich pottery was then continued by George Bacon of the Alfreton pottery.

By 1780 the fortunes of the Pot Works had declined and the site was used as a brickworks until 1810.

This article is courtesy of Rosemary Bower. It was written by her mother for the WEA booklet to celebrate the Silver Jubilee of Queen Elizabeth II.